He was a Mavi Marmara Veteran who was in a coma for 4 years. He lost his life today and joined the caravan of martyrs. With the martyrdom of Söylemez, the number of martyrs killed by Israel in the Mavi Marmara rose to 10.

Uğur Süleyman Söylemez was born in 1963 in Ankara. A self-employed person, Söylemez was in the flotilla that brought humanitarian aid to Gaza in May 2010. Immediately after the Mavi Marmara attack, Uğur Süleyman Söylemez was named among those who lost their lives on the ship, but it was later determined that he was among the injured and was seriously injured by a bullet he received from his head. Uğur Süleyman Söylemez, who has been in a coma in Ankara for 4 years, joined the caravan of martyrs from his home in Ankara today. After being brought to Turkey, Uğur Süleyman Söylemez was transferred to Ankara Atatürk Research Hospital with two other seriously injured people, where he was treated in the intensive care unit for eight months. No improvement was made in his treatment, and at the end of eight months, he was discharged from the hospital to be cared for at home. Uğur Süleyman Söylemez, a businessman, is married to Tuğba Söylemez and has three children, Ahmet (1988), Zeynep Kübra, (1991) and Fatma (1997). Soylemez, who is involved in humanitarian aid work for the needy through various social events she organizes, is known as a person who keeps her promises, is reliable and sensitive about humanitarian issues. Ms. Tugba, talking about her husband, said, "She always had a special interest in Palestine." says.

Ms. Tuğba, can you tell us about  Mr. Süleyman’s  aid activities, her interest in the oppressed in the world and Palestine?

Uğur was very sensitive to all people under persecution, he loved to help. He also helped charity foundations as much as he could. His most sensitive point was Palestine.

Mr. Süleyman continued his professional business life. He was determined enough to give up his job and take the risk of jumping on a ship and going to Gaza. How did he grow up to all this?

He put himself in the shoes of the oppressed and felt the same pain. He could not see material things. He did not even see his children, for example. “I have to go and help them.” He got on the ship and left. It always was. When it was said that someone would be helped, he would run before anyone else.

I think Mr. Süleyman got on the ship from Antalya. They stayed at Kepez Sports Hall for three or four days in Antalya. There were people of different religions, races, languages and political views in Kepez. Did you ever talk when you were in Antalya, for example, what did he tell you about the environment?

We were making frequent phone calls. He was telling everything he had lived there. I think an Englishman had become a Muslim. He talked about it. He was describing the environment. “Some read the Qur'an, some listen to music… Everyone acts according to their own beliefs; It's a very different environment.” he was saying. “Actually, I would love to have you here too, but now I will go.” he said.

When was your last conversation?

The last time he got on the ship, he called. "We're moving, maybe we won't see each other again, so be fair." said. This was our last conversation.

Were you able to hear from your spouse after the heinous attack? What process did you experience?

We did not hear from my husband for three and a half to four days. After all the passengers and injured people returned, we learned that one seriously injured person remained in Israel, his condition was very serious and therefore he could not be brought to Turkey. With the Prime Minister's instructions, a photograph of that injured person came. The person in the photo was my husband.

How did you learn about the attack? What did you experience afterwards?

My son and I were constantly following the journey on the IHH website. It was between 10 and 11 on the evening of May 30, it was said that blackouts had begun. My son said, "Mom, let's go to the Israeli Embassy." said. I said, "Let's wait for a morning anyway." I said. When we got up for morning prayer, we immediately turned on the internet and said that the ship was hit; We learned that there were seriously injured and martyrs. As soon as we prayed, we breathed in front of the Israeli Embassy. There were only two people in front of the embassy at that moment, then people started to gather. First, the number of martyrs was said to be five, then another news came and it was said that the number of martyrs was 20. My son and I knew our father was one of them. Because my husband was a very brave person who did not avoid anything. He was a very different person... He was a person who could sacrifice his life, which he did anyway...

You went to Israel by ambulance plane to pick up your husband. Have you had contact with Israeli officials? What did you experience there?

Embassy officials greeted us. Together with the Turkish doctors accompanying us, we went to the hospital where Mr. Uğur was. The doctors said, “We will see first. We will get information about Mr. Uğur’s  condition. Then we'll get you in touch." they said. Then I went with my son and my wife. They were saying that Mr. Uğur was in a very serious condition, he was a patient who could be lost at any moment, and therefore it was very risky to be taken to Turkey. I was very disturbed that my husband remained there in the hands of the Israelis. I consulted with my son and decided to bring my husband to Turkey no matter what. They made us sign some papers for the transfer and said they accepted no liability. And I said, "Can you tell me, you were accepting responsibility when you shot, but now you don't?" .

Let's say that Mr. Süleyman got up tomorrow morning, what do you think would be the first thing he would do?

Sometimes we talk, but if he gets up now, I'm sure he will want to go to Palestine again. He will go without hesitation.

Ms. Tuba, is there anything you would like to add at last?

These events have matured us. We were not aware of many things before. When people experience certain things in person, they better understand what is going on in Palestine. He understands better the families of martyrs and injured families there. Families of Mavi Marmara martyrs and wounded should not be forgotten. All Muslims should truly help them from the heart.

"My brothers and sisters, before I write my will, I greet you with the greetings of Allah. These days, if Allah allows, we are about to go to Gaza with the humanitarian aid ship organized by IHH. While making this decision, we are with you against the oppression of the oppressed Palestinian people, and to help you. Acting with the awareness of our responsibilities of brotherhood, we are ready to leave everything behind and rely on Allah for any difficulties that may come our way, because when the time comes, we must leave everything for Allah's sake because Allah's cause is above everything else. We are ready against all kinds of threats of Israel. If they hit, we will be martyrs, our greatest ideal is martyrdom. If Allah makes our way clear, we will deliver our aid to our brothers who are in an embargo state, and I hope we ask our Lord for help in this situation until we die. the sensitivity you show, the t Let's show it against the taghuti forces in the society. Let us act responsibly, as groups of the people of tawhid among us, to resolve the conflicts, act as one body with the consciousness of the community against unbelief, and ask Allah's help to make Allah's religion prevail. Let's love each other for God's sake. Let's be sure people, because the Messenger of Allah was a sure person before the Prophet came, the first thing is to be sure. Without prolonging my will, I ask you to be brothers, love one another for Allah's sake, but believers are brothers. Never leave the line of tawhid. Take refuge in Allah from Satan. Inshallah, we will meet together as tawhid brothers in the hereafter, which is our true home in paradise. I beg you to excuse yourself. 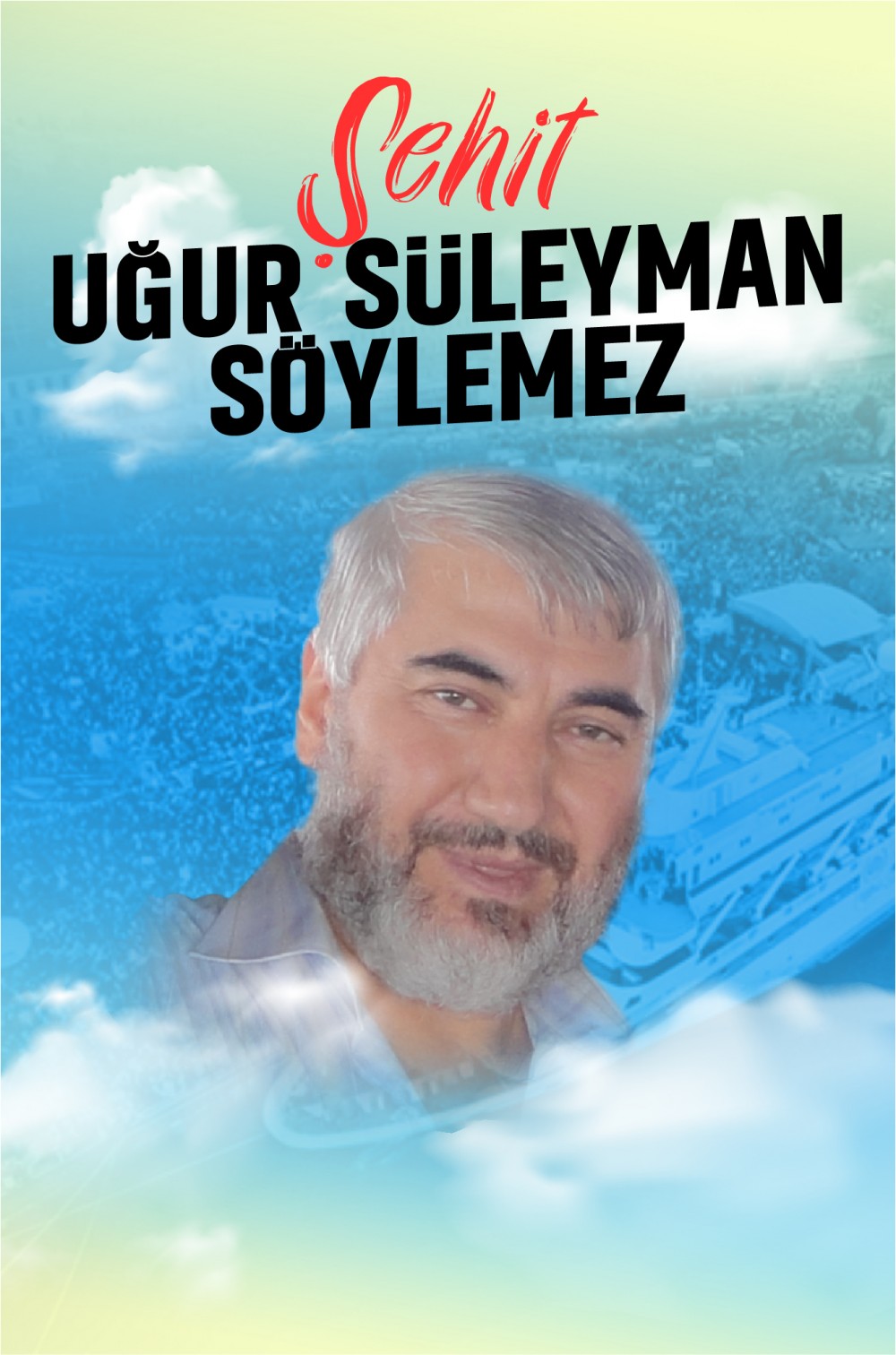