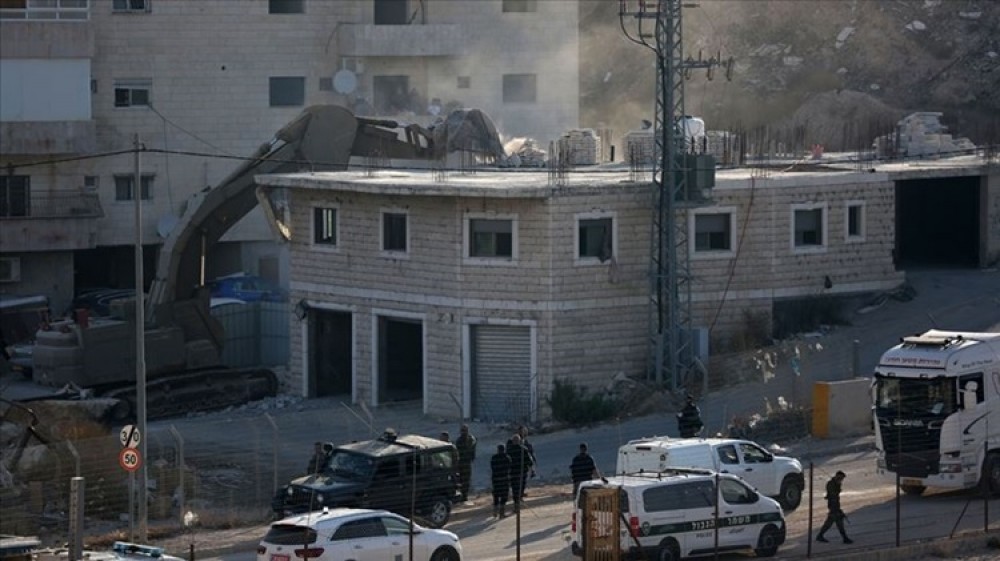 Israeli forces began demolishing some Palestinian houses in occupied East Jerusalem on the grounds that they were close to the wire barriers, which are the continuation of the Separation (Shame) Wall. He came to the Wadi El-Hummus neighborhood in the Sur Bahir region of East Jerusalem.

Israeli forces forcibly evacuated some of the Palestinian homes that the Israeli Supreme Court ordered to demolish on the grounds of their proximity to the wire barriers, which are the continuation of the Separation Wall, in the Sur Bahir area.

While the tension between the residents of the neighborhood, who reacted to the demolition, and the Israeli forces gradually increased, Israeli construction equipment destroyed a two-storey building so far.

While the preparations for the demolition of some houses in the region continued, it was seen that many Israeli soldiers placed explosives in the settlement in order to demolish a multi-storey apartment building in the region.

Speaking to Anadolu Agency (AA), spokesperson Milhim reacted to the demolitions initiated by Israel this morning in the Vadi El-Hummus District in the Sur Bahir region of occupied East Jerusalem.

Milhim, "According to the agreement (Oslo Agreement) signed between the Palestine Liberation Organization (PLO) and Israel, these demolitions carried out in zone A are part of ethnic cleansing and aim to displace the Palestinian population. Israel is demolishing buildings on the pretext of being close to the wall (Separation Wall) that was built later." said.

Stating that Israel wants to separate Jerusalem from the Ramallah administration, Milhim emphasized that the international community should not remain silent in the face of this injustice.

Milhim also pointed out that Israel is likely to demolish about 200 buildings in the Sur Bahir region for similar reasons, and drew attention to the magnitude of the danger.

According to the news of the Palestinian official agency WAFA, the Palestinian Presidency condemned the demolitions initiated by Israel in the Wadi Al-Hummus District in a statement.

Israeli forces had begun to forcibly evacuate and demolish some Palestinian homes this morning on the grounds that they were close to the wire barriers, the continuation of the Separation (Shame) Wall, in occupied East Jerusalem. In a written statement from Hamas regarding the demolition of some Palestinian houses by Israeli forces, "Israel wants to systematically change the demographic structure of Jerusalem by forcibly displacing the original owners of the land. The attempt to demolish is an ethnic cleansing in all its dimensions." statements were included.

Pointing out that Israel has tended towards such initiatives with the support of the USA and increased its violations against the Palestinians, the statement continued as follows:

"Israel has seriously increased the dose of violations after the Bahrain Workshop, which we warned about its repercussions. However, this will not affect the resistance of the Palestinian people."

The Islamic Jihad Movement also reacted to Israel with its written statement.

The following statements were used in the statement:

"The invading Israel's demolition of houses in Jerusalem and its displacement is a crime against the Palestinian people. These violations are a direct result of (US President Donald) Trump's deal (Deal of the Century), occupation and normalization process."

A large number of soldiers and police from the Israeli forces, accompanied by construction equipment, came to the Wadi El-Hummus Neighborhood in the Sur Bahir region, on the grounds that it was close to the wire barriers, which is the continuation of the Separation (Shame) Wall in occupied East Jerusalem, from the early hours of the morning. started demolishing houses.

Israel's Supreme Court last month ordered the demolition of the buildings in Sur Bahir, claiming that they "posed a safety hazard" due to their proximity to the wire barriers that form the continuation of the Separation Wall, and gave the property owners until June 18 to demolish their buildings.

Thereupon, Palestinians applied to the Supreme Court to stop the demolition of 10 buildings, some of which are under construction, but the court rejected this application yesterday.

Experts warn that this decision of the Israeli court may lead to the demolition of many houses in other parts of Palestine.